OneSync is a custom sync system that is built on top of GTA: Online's codebase, it increases server slot count so more players can play on a server and at the same time it introduces better development standards including server-sided synchronization states for entities, which we'll cover in this article.

It's worth mentioning that OneSync is free up to 48 slots, after such, you should get one of the following tiers from Patreon starting from FiveM Element Club Argentum 💿.

How is synchronization handled?

Most of the sync data is handled through player 31, game events are handled through this player as well, this is a player reserved for every individual client, and it's used to write sync data to the server to later on be analyzed through sync-nodes for parsing.

What are sync nodes and how do I interpret them?

Sync nodes are synchronization data nodes, networked entities depend on these to transmit data to other clients/players on the server. The most simple one we can find is CSectorPositionDataNode.

We’ll have to warn you that what lies ahead is a little bit technical and is just presented as is for educational purposes on how to analyze game-code and create a PR (pull request) if you would like to contribute to the code-base.

This synchronization data node is used to share sector position data to other clients about a specific entity, parsing is shown below. It's worth mentioning that the Parse code written down below is written by reverse-engineering game code (more or so by reading NodeCommonDataOperations<class CSectorPositionDataNode, class IProximityMigrateableNodeDataAccessor> first's VMT (Virtual Method Table) method which is the read method, which would be offset 8 from the VMT). 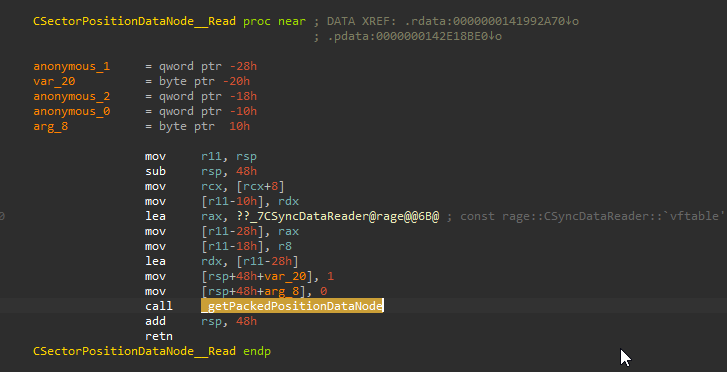 The game reading the position:

The reversed code (from SyncTrees_Five.h):

The Parse method up above deserializes all relevant data about that specific node, this is useful since it can later on be used to create server specific natives, take a look at the example down below (from ServerGameState_Scripting.cpp):

As you can see entity->syncTree->GetPosition(position) directly accesses CSectorPositionDataNode to show information about its position via a native on the server, so all that work we would have done before is clearly in effect now (from SyncTrees_Five.h):

Culling is used to avoid sending a lot of synchronization data to the server (such as population among others), thus reducing server load, it's what allows OneSync to handle a lot of clients. Culling has a range for each specific player, and entities are culled to players within this radius. It was introduced in the following commit, and had several iterations. You could say that in a way, it 'conceals' entities. There's natives such as SetEntityDistanceCullingRadius and SetPlayerCullingRadius to change the default culling radius.

When an entity goes out of range, it's no longer controlled by their original owner. This means that any entity that would be out of scope will be culled and migrated/disowned. By default, the culling radius is set to 424 units around the entity.

OneSync allows you to create entities on the server such as Peds, Vehicles and Objects among others. One of the advantages about this, is that the server allows you to call natives via RPC (Remote Procedure Call) to perform actions on the client without having to request control of an entity from the client.

I want persistent entities, how do I do it?

Create them server-side as shown up above. If you want to stop this entity from 'despawning' when far away, you could always set the entity culling radius to a very large number by using the following native: SetEntityDistanceCullingRadius. You should use this sparingly though, and you should rather do manual lower-level sync such as latent events for blips if you have large amounts of entities. Make sure to make use of network id's since they remain valid as long as the entity is alive.

Entities can be locked down from the server so they can only be authored by it, meaning the server has full control. This allows you to keep things in check and deter users from doing things they shouldn't be doing, such as spawning stuff client side, for... oh well... malicious purposes, i.e.

Buckets and why you should use them

Server versions from pipeline ID 3245 and above have added a ‘routing bucket’ functionality, which is similar in concept to the ‘dimension’ or ‘virtual world’ functionality seen in prior non-Rockstar GTA network implementations.

One can assign a player or entity to a routing bucket, and they will only see entities (and players) that belong to the same routing bucket. In addition to that, each routing bucket will have its own ‘world grid’ for determining population owners, so even if you have population enabled, you’ll notice nothing unusual at all when using routing buckets.

Example use cases include:

Example use cases do explicitly not include interiors. Interiors should be using the traditional ‘conceal’ native functions, or the future support for 3D-scoped routing policy, which will also allow specifying any ‘instanced’ zone for MMO-style servers so a server can have a map area ‘dedicated’ to a player/party on a mission but still be able to see everything going on outside that zone. [source]

Each bucket can have different rules, these are named 'lockdown modes' and they are described down below:

There are different kind of natives for routing buckets (you can click on them to read their docs):

State bags allow you to set attributes to entities and allow other clients to access those, you can read more about state bags here.